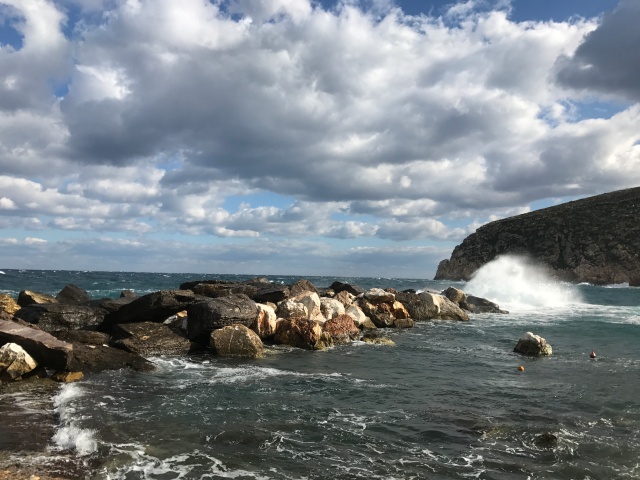 Sitting on the ferry on our way back from the Greek island, Naxos. Just spent the first 2 hours of the journey dancing on the deck of the ferry. Moving to the music, the wind, the waves and the sunshine.

Dancing feeds my joy. It is meditation in movement. Dancing has also allowed for some personal space this trip, as one of my intentions was to find solitude in everyday. Not to mention, dancing gets my stink out. Movement to music feeds the spirit and detoxifies the mind and body. Although my kids look at me as if I’m nuts, and I may have embarrassed them on the ferry – I will keep dancing. They will love me more for it. For dancing my stink out, I am calmer and more grounded, making me easier to love.

Meteora weather was fog and pouring rain so we did not get out to explore the monstaries as much as we would have liked. Metorea however, did allow us the time to sleep in and have lazy days after a busy month of travelling. But not the fresh air we were all craving.

Naxos Island was exactly what we needed. We were able to explore the beauty of nature as well as allow more time for some R&R. The island was quiet. One hundred thousand tourists flock to this island in the summer months, but during the winter it is only locals that are wandering about. The old town was fun to explore. Narrow pedestrian only streets lined with snow white buildings and blue shutters, made for a wonderful contrast. One could find marble stones and pillars that once stood as temples, amongst the towns walls. The history is so vast that for centuries the temples themselves were used as quarries for their marble. Many generations pillaged the temples to build their own churches and homes. 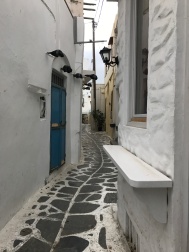 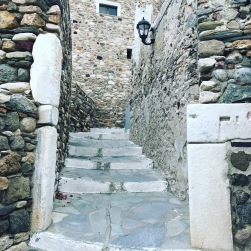 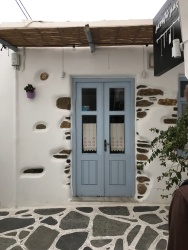 We rented a car to explore the island on its winding roads. Centuries old rock fences, criss crossed the hills like a zebra’s stripes. Goats wandered among the marble cliffs and olive trees. We stopped often to walk the trails where there are fallen statues and temple ruins built to honour the Gods 2600 years ago. We were the only people within miles of these ancient temples. To have these ruins to explore on our own was an honor. When the sun sets and radiates off the island’s white marble hills and aqua blue waters of the Aegean Sea, it is easy to see why Greek God’s were said to have lived here. The energy is old and vibrating.

The sun shines brilliantly off the Aegean Sea as we journey back to Athens. We are the only ones sitting on the deck as it is winter for the locals. I enjoy the days that we “travel” between destinations. It is the journey itself that allows time for reflection. This is when there is a lot of discussion as a family. With excitement we share our experiences, thoughts and emotions on where we have been. The boys have become intrepid travellers and I love seeing the world through their eyes. Travelling has also brought us closer as a family. The bonds run deeper with each experience. 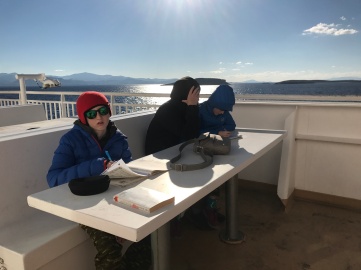 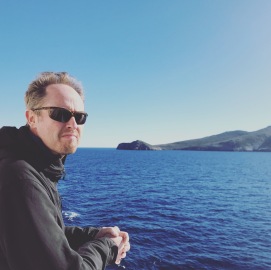 Homework and views from the ferry

So we will arrive in Athens soon. We were in Athens for a short time before heading to Naxos and we all enjoyed the energy it gave off. We look forward to spending a little more time there. We will sit and celebrate Gene’s birthday eating delicious Greek food with the Parthenon in view.

Then in the morning, one last gelato and we fly to India.